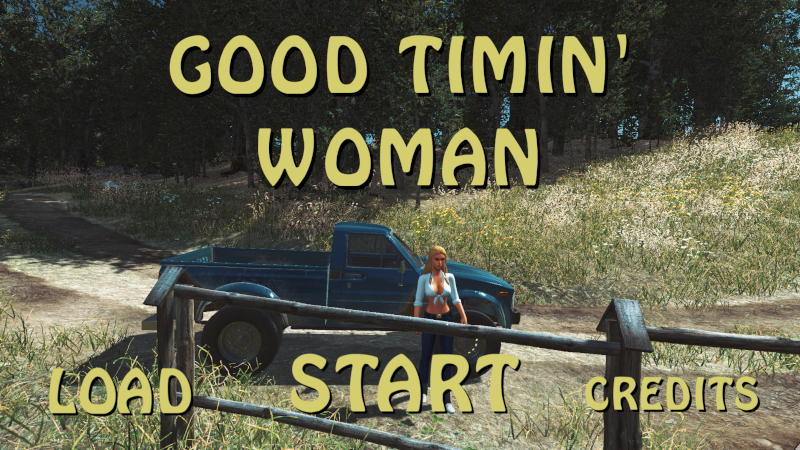 The AdventureX conference is a lot of fun where you can hear interesting talks, look at upcoming and recent games, and meet other adventure game developers. Unfortunately, it didn’t happen this year for obvious reasons. So, they had a game jam instead!

First off, if you haven’t played my entry yet, you can play it here: https://standoffsoftware.itch.io/good-timin-woman. It’s a traditional point & click adventure game in 3D but with driving sections in a truck.

Now that’s out of the way, let’s get down to talking about how AdventureX jam went down.

Before the jam started, I had the idea to make a sort of Dukes of Hazzard-ish game where you drive around in the country listening to fun country music and thumb your nose at the law. That was the entire idea before the jam started because I didn’t know what the jam theme was going to be.

But before I could even participate in the jam, I needed to get my upcoming commercial game, Alien Function, in a… functional state, so that the writer could do his work while I was jamming. That took until Thursday, Nov 19th so I was already five days behind getting started on my jam game.

The theme was “A Good Time,” so I had determined at this point that the game would be about prostitutes. After all, prostitutes always say “Are you looking for a good time?” don’t they? Of course they do.

But the first thing I wanted to do was actually make my inspiration for the game in the first place which was driving around in a truck in the country listening to country music.

That took me until Monday, the 21st when I finally had this:

Now, I just had to actually make that into a narrative game in 6 days…

Since this was a narrative game jam, I had to come up with what the story was going to be, and design the puzzles. My first ideas for the story were that they had several potential clients and they knew one of them was an undercover cop, but they didn’t know which one. The objective would be to identify the cop.

However, this plot had too many problems with it. First of all, it had too many characters, and I had hopes of having voice acting in this game, although I was not yet sure if it was going to be possible. There were also a lot of other problems that would have made the game longer and more complex than was feasible for the time I had left.

I settled on a much more simple and more linear plot for the game.

Here’s what I ended up with: 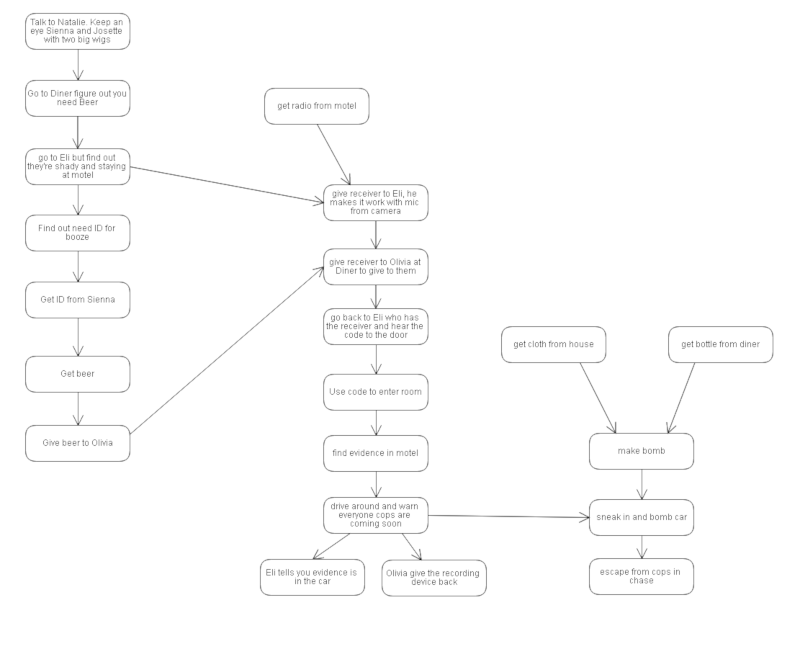 Once I had the puzzles designed and the plot down, I was confident I could get voice acting in, and started advertising for voice actors.

All I had made so far was an environment where you could drive around in a truck, so I needed more scenes for things to take place. As I made each scene, I also implemented all the logic that would be in that scene so that each scene was largely game ready by the time it was done. 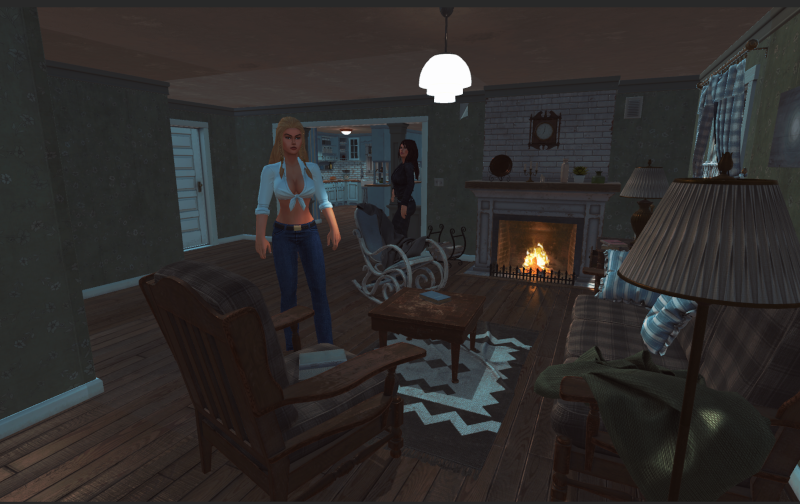 I got writing finished and scripts out on Thursday, and while I waited for that to come back, I had a substantial amount of work left to do even though the adventure game parts were all implemented.

I had driving in this game, and that would be pointless unless there was some gameplay requiring driving. I left off making that until everything else was set in case I needed to cut it, but it looked like I had time to get it in.

The first one was easy-ish to make. You just have to drive to a number of places within a time limit. The second one is a car chase, and it took a long time trying to get the AI car to actually do what I needed it to do. To be honest, it didn’t actually do what I needed it to in the end, but I found ways to cheat and make it seem like it was by strategically teleporting it closer to the player if it got too far away and the player wasn’t looking at it.

In the meantime, I was putting voice acting in as it came in.

This was probably the easiest time I have had in a game jam so far. While my game was stupidly ambitious as is par for the course for me, and I was still finishing up something even an hour before the jam ended, I felt a lot more relaxed toward the end than I have in any jam before. There was never a time when I felt like it just wasn’t going to get done or that I was completely killing myself. Even though I was definitely skipping on sleep and working constantly, it felt rather leisurely compared to other jam games I’ve done.

After submitting, there were some bugs to be fixed over the next few days (some of them game breaking!) and I needed to figure out how to make it downloadable more easily since Itchio has a 1 gb file size limit. Initially, I had it on an external server, but then I realized I could cut it up into a multi-part zip and have it on Itchio after all.

It was a very good time, and I’m proud of the game that came out of it.