So, Adventure Jam happened again, this time from May 4th – May 18th, 2018. I had the Unicorn Dungeon release on the 23rd, but that game was completed and ready to release, so I figured I could take some time off to do this before descending into marketing hell.

First off, if you haven’t played my entry yet, you can play it here: https://gamejolt.com/games/crosspurposes/340843. It’s a multi-player point and click adventure game to be played by up to 3 players simultaneously.

Now that’s out of the way, let’s get down to talking about how adventure jam went down this year.

Having learned my lesson last year, this year I was coming in with an actual plan. The game was going to be about my real life band, and we would compose the music for it and could do the voice acting. It was a great idea, and I loved it. We met several times before the jam started and had the game already partially designed, and the entire narrative planned out.

Then… the guitarist suddenly had to move his music school exactly the weekend Adventure Jam started, so he and the studio would be out of commission for the entire jam. That idea had just completely collapsed. This was mere hours before the jam was to start.

Back to the drawing board. So much for having a plan.

When the jam started, I had no clue whatsoever what I was going to do and was frantically looking back through lists of game ideas to come up with something. I had been wanting to make a multi-player point and click adventure for a couple years, and although it seemed like a daunting project for a two week jam, I decided to give it a shot.

After two days of prototyping a system using AC and UNet in which you could walk around and interact with people and objects simultaneously, I figured the idea was workable…. probably.

Mostly how it works is that the client runs actionlists in response to interaction, and those actionlists do nothing but use Object->Send Message to send a message to the server at which point the server does absolutely nothing except send a message back to all the clients about what actionlist to run in response. All data about the state of the game is kept separately on each client, and as long as all the same actionlists are run on each one, it stays in sync. It’s the worst client-server architecture ever, but it’s not like I had time here folks, and I was working with a framework that was never intended to be used with multiplayer, so I had to trick it into thinking it was a single player game. I have some ideas though about how to do it better if I tackle this again.

I still didn’t have an actual game in mind, just this idea that it would be a multi-player point and click adventure, so…

It took me about 2 more days of writing and scrapping game designs before I came up with something that captured the feel of what I was going for.

My earliest idea was one in which each player is assigned a certain role with goals they need to accomplish, and you have to accomplish your own goals while trying to stop the others from accomplishing theirs. While it may actually have been a decent game, it wasn’t really an adventure game, and it turned out not to be anything like what I wanted to make.

I had to set down some guidelines about what it was exactly I wanted my game to feel like.

With this in mind I eventually settled on a game involving a detective, an assassin, and a spy. All of them were looking for the same villain, a mobster named Stu Wilkins, but they all had incompatible goals for what would happen when they found him. So the players would have to work together, but also be in constant conflict trying to push the story in one way or the other toward their own aims.

At this point, I’d already wasted four days, and hadn’t even start making the game. It had all been preliminary work and planning. This was already going badly.

Then, I spent the next four days designing the game. Ok, so it wasn’t just pure design. I was implementing at the same time as designing but implementing was the easy part. The hold-up was the design. Of course I had no artwork of any kind. I was just using demo sprites that came with AC for all of my objects, items, and characters at this point.

It was a grueling and horrific process, but eventually the game was designed and tested through all paths by some time Saturday the 12th but then I needed to write dialog because I needed to get voice actors on it as soon as possible!

I learned quickly last year, that if you don’t have voice acting in your adventure jam game, you’re basically just throwing it in a scrap heap and wasting your time. No one will care about anything else you do if there is no voice acting, so that’s an essential component.

Writing was done by Monday and sent to actors, and now I just needed to do art. Art is the thing I hate the most in the world 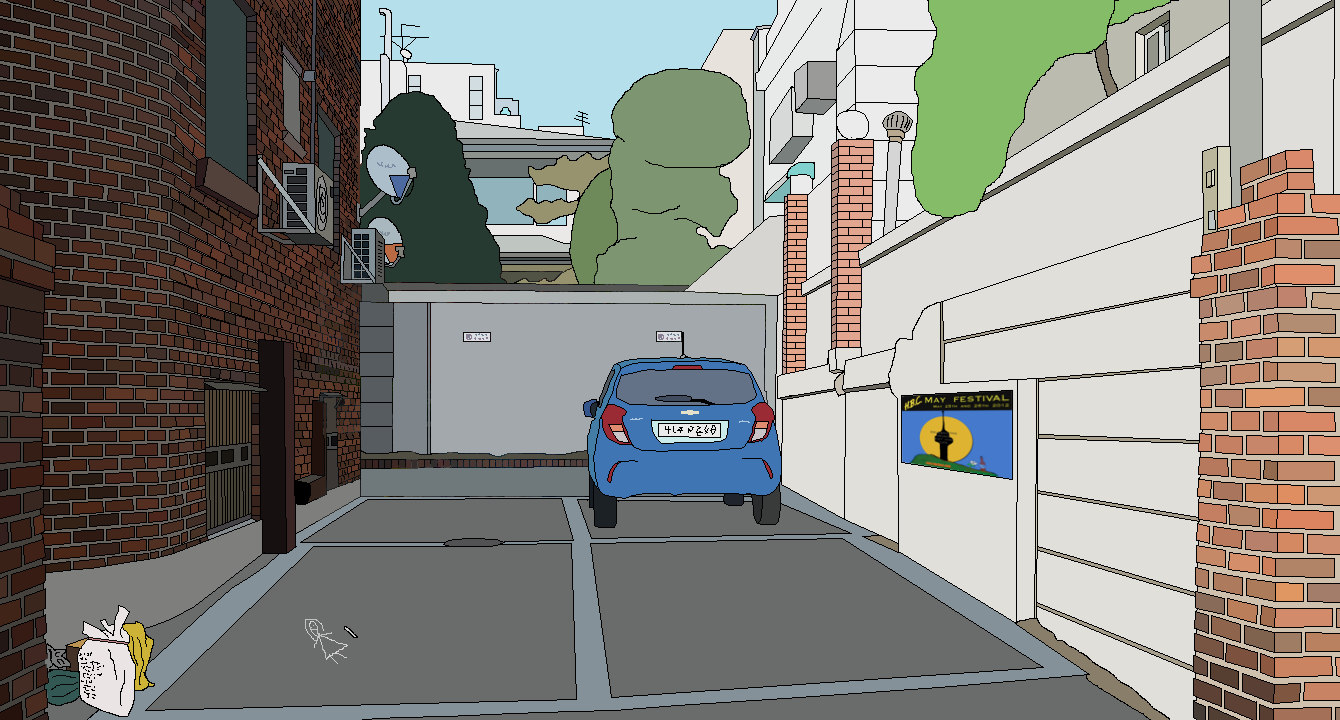 Have I mentioned yet that art is the thing I hate the most in the world? I don’t know how artists do it. It’s tedious and frustrating and all around a horrible way to spend time.

But I spent all of my time doing it, for three straight days. This is about the point when I pretty much stopped sleeping altogether. I would take a nap for a couple hours when I just couldn’t continue any longer. By the time the background art was done, I had only about 24 hours to get the game finished.

I had all the voice acting back by then, so I spent a few hours cutting that up into the needed lines so it was ready to go, and started putting the art into the actual game.

By the time all art was in the game, I still had no character art or walk cycles. Characters didn’t take very long, but I spent over 3 hours trying to do decent walk cycles before I gave up and made the worst walk cycles known to man just to get something in.

It only took about an hour to make all the crappy inventory item pictures, and at this point, there was only like an hour left before the deadline. I grabbed some Kevin McCleod music and threw it in. I took a practice picture I had laying around and stuck that up as my start screen with a simple “Play” button on it.

The game hadn’t actually been played in a week at this point, since I had done the initial design and implementation, and while I thought it probably theoretically worked, I had done a lot of stuff since then, namely putting all the dialog text in the game and making the characters actually walk around and all that stuff, so a large part of this game was completely untested.

And I had run out of time. It was 15 minutes before the deadline, I had a game I had no idea would even run, but I quickly compiled it (thankfully it’s a small little 2d game so compiles quickly) and threw it up on game Jolt right before the deadline.

…without the voice acting having been added. Yep, all voice acting was sitting there edited and ready to go but not in the project. Now if I had been more clear headed and not sleep deprived, I would have just dragged it in. It wouldn’t have played because the files wouldn’t have been named correctly, but they would all have been there and then I could just call them not playing a bug, and just go rename the files which were already in the game project and make them work. In any case, it’s really a technicality that voice acting wasn’t in it, and I still consider the voice acted version to be the real jam version even though I uploaded a no-VO version for the sticklers.

…and it didn’t work

I mentioned already that this game was uploaded almost completely untested. The last time I even pressed play on the project was a week before I uploaded it, so of course it didn’t work. The start screen I had made wasn’t sized correctly for the resolution which made the play button unpressable. But I guess that’s for the best really because if anyone had managed to try to play the game, they would have found so many more bugs that it still would have been unplayable.

But I couldn’t deal with it at that point after almost a week of no sleep, so it sat there unplayable for a few days before I finally went in and fixed the bugs, and put the voice acting files in which again, had already been created and ready to go before the end of the jam, so sue me! (but there is a no-vo version as well as I mentioned)

I keep saying that what killed this project was the art, but that’s not really true. What killed it was the design and writing, things that could have been done before the jam even started if I wasn’t forced by unforeseeable circumstances to start from scratch the second the jam started.

The art took days of constant work, it’s true, but even that would have been fine if I hadn’t lost days concepting and designing before I could get any real work done.

But there it is, it’s all over now. I’m sure I’ll forget what a miserable experience Adventure Jam is before next year, and I’ll try it again 🙂

One thought on “Adventure Jam 2018 Post-Mortem”